A man from a tinpot country and an unelected politician, that should tell you all you need to know about the EU. 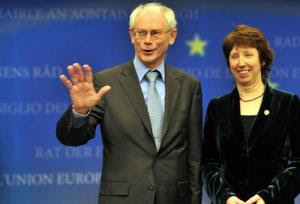 With the appointment of an EU 'president', there is now yet another High Office the holder of which would be shown no respect or deference by me in the unlikely even that we should ever meet. So the Germans and the French have finally conquered Europe with their influence and installed their Belgian puppet Herman van Rompuy.

Well done to the rest of Europe, for yet another great step backwards from democracy and becoming the laughing stock of the entire world.
Sure it's great that Blair didn't win, but what about Mr.EUTax? Seems to me he's just like Blair just without the charisma. You have NO mandate in Britain and we dont have Presidents here. Also, this Baroness Ashton, yellow streak Brown's European trade commissioner has never been elected to anything in her life, so obviously thats not going to start now with the EUSSR!.
This is all to be added to the already long list of MPs, and a shorter list of peers such as Gorbals Mick for whom I have nothing but contempt.
How can any sane person consider it correct to appoint a 'president' not on the basis of a popular vote, nor even as a result of a vote in a parliamentary body, but rather as a result of horse trading by self interested politicians.
I long for the days when we could respect our 'leaders', and my lack of capitalisation on the words 'president' and 'peers' is quite deliberate.
What a bunch of 'head in the clouds' pompous wasters.
Posted by Oliver at 01:26