When do the British electorate get to participate in democracy? 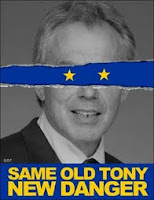 Tony Bliar and yellow streak Brown were elected on a promise of holding a referendum and then reneged on that promise. For 13 years, we have had Bliar and yellow streak Brown bending over for every European politician that wanted a piece of British cake.
David Cameron made a policy which is now outdated, so he changed it, never having put it forward at an election anyway. Who is in the wrong here, for goodness' sake? Why is Cameron getting the stick for yellow streak Brown's two-faced idiocy?
The authority of Parliament rests upon the basic principle of consent of the people. Upon this basic principle is our constitution based. The people invest their sovereignty in parliament and, this sovereignty is renewed every five years, hence, every parliament is sovereign.
This Liebore government has had control of parliament for over a decade and how now handed over the sovereignty entrusted to parliament to an external power. The next government will not be sovereign in the traditional sense that we know and, as a result they have acted unconstitutionally.
Pierre Lellouche, France's Europe minister, described as "pathetic" the Tories' EU plans announced today, warning they would not succeed "for a minute". Lellouche, one of the most Anglophile members of Sarkozy's government, made his remarkable intervention after David Cameron outlined a fresh Tory approach to the EU in the wake of the full ratification of the Lisbon treaty.
That's "bullying" to me, just a French politician's style to express an opinion more directly than usual, which is a bad thing. When the French start peddling claptrap like this, you know that they are scared shit less.
I know in France there are referendums, and they have a really democratic process of ignoring them. They love the EU until it affects them, then they ignore it and carry on as usual.
Are we living in a dictatorship? Oh yes! Soon there will be an unelected EU President who will lord it over us and the sole right to propose legislation resides with an unelected commission.
The ultimate authority of the state rest in the hands of the people and, as a consequence we have an absolute right to take it back.
Can we have our democracy back please?
Posted by Oliver at 22:47