Arsenal were desperate and Arsene is in denial. The defence and midfield deficiencies have been obvious all year and they lack discipline.
Sir Alex Ferguson on the other hand has built and renewed teams consistantly. Sold players "before their time" and been criticised. But look at his achievements.
People who criticise the Champions League performance of last year - but 3 finals in 4 years I think proves he's the best and just come up against and exceptional Barcelona team.
But he's weighed up the situation, got in the market early, kept Welbeck, signed Jones and Young who have been phenomenal and given Cleverly and Anderson their heads. They are playing the best football that I have ever seen a United team play under Ferguson.
Wenger inherited the base of a crack team. Seaman, the Back Four, Ian Wright, Bergkamp, Parlour - the real gems he added were Henry and Vierra. His successes in the first half of his reign were significantly down to the squad he inherited.
Strange with the success he had, based on home based solid professionals, which he added to with the likes of Campbell seems to have been forgotten.
His current crop have looked too lightweight for several years. No solidity in defense, no leadership.
This underlines to me how over rated he is as a manager. If I were an Arsenal supporter, I would be pleased to let him go and would look to David Moyes - he is a great manager in the making. He deserves a chance to be with a big club.
Arsenal fans need to get behind the club and demand that the board move on from a pay policy that was relevent when Arsenal were at Highbury and it's 38,000 capacity, and adjust the clubs pay to profit scale,
Posted by Oliver at 23:27 No comments:

No one thought to ask Miliband what he had been doing for the past 13 years.

Miliband's focus at the moment is on setting up an enquiry, no doubt to be commissioned from experts of his own political persuasion and associated vested interest promoters, pushing a narrative of moral equivalence between bankers legally making huge profits, MPs cheating on their expenses and the criminal acts of the rioters. He also invokes every aspect of Coalition cuts loathed by the client state culture as being a significant factor behind the riots. At the same time, he claims he isn't doing any of this.
Whilst talking to kids this morning Miliband got out his pen and took notes. If Cameron had done this he'd be immediately attacked by the likes of Ben Bradshaw or Harriet Harman as being so out-of-touch he has only started thinking about these issues and needs to mug up on the facts.
No one thought to ask Miliband what he had been doing for the past 13 years. All the money Labour threw at these areas....all wasted.
Miliband talks with "fork-tongue" or talking out of both sides of his mouth. It's about time he came up with some policies....instead of trying to score political points and calling for another Inquiry which we can ill afford.
Posted by Oliver at 23:21 No comments:

You want to understand?
How about the lack of discipline and morality instilled in them by their parents?
How about a dependency culture which makes them and most of their cohort feel that they are owed a standard of living which they are not prepared to work for but want handed on a plate?
How about a lack of respect for the laws of the country they live in and the democratic process? Put these things right and there will be no riots.

I'm sick of some people calling these young people "disenfranchised". I hope they are soon disenfranchised in Wormwood Scrubs.
Posted by Oliver at 09:05 No comments:

Balls... scary picture of a scary man who had scary levels of power. 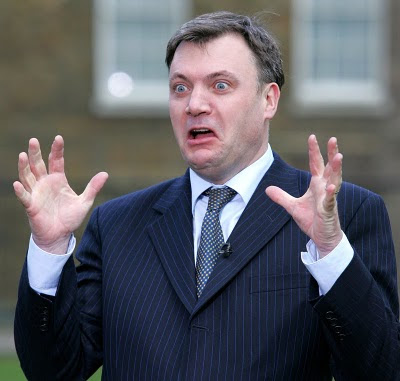 Scary Balls, you have not earned the right to lecture others since it is the catastrophic mistakes of the government of which you were both a member and adviser that has brought us to this state.So let me write this specifically for Ed scary Balls if he ever reads it: Stop this silly Punch and Judy show, grow a conscience and think of your own children's children who will be growing up in the mess you and likes of you are trying so hard to create.
Posted by Oliver at 03:17 No comments: