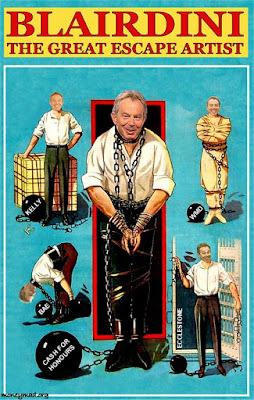 Bliar believes he was right to invade Iraq and in just about everything he did, with the possible exception of not facing yellow streak Brown in a leadership election in 1994 or sacking him as Chancellor.

So, Bliar's Blood Money for the book is being given to the British Legion. It's amazing how guilt can eat away at a person, but the British Legion should refuse this money and instead ask for Bliar's government-funded personal security to be stopped immediately and for that money to be channeled instead towards its cause.
So I imagine that his decision is not only to support the troops out of a sincere wish to do just that, but also because he thinks that it will make people more likely to read his book.
Bliar would like people to read his words because he thinks he is misunderstood and unfairly vilified for Iraq, which overshadows many of the bad things he did, both domestically and in other armed interventions.Even on Iraq, he still contends he was right, and no doubt much of the book will try to convince people he acted honourably and the world is a better place regardless of the mass slaughter and political turmoil that resulted (he does say he would make the same decision again).Of course, he is unlikely to change many minds, but he may now receive more of a hearing than he would otherwise have done.
His greed for power and leverage and the mistakes it caused won't be washed away with money, not even converting to Catholicism believing confession or perjury will allow you into the gates of heaven.
He feels no guilt, only regret at all the suffering he and Bush caused.
Posted by Oliver at 19:08 3 comments:

The Labour party cannot exist without the premise that the state comes first - always.
I don't think they realise it yet - but Cameron is sucking the life out of the Labour party. He is trapping them, and before long, they will be an utter irrelevance - if they aren't already.
This country and the hardworking people in it are sick and tired of Labour's white, snotty nosed, war criminal politicians telling us how to live as they illegally order the murder and torture of other people in foreign lands. They throw away our soldiers lives and our tax contributions as if they were confetti. They have no respect for us or for the country because they think themselves better than those who pay their wages.
Tell us David Miliband about the Duty of Care towards Dr David Kelly. Tell us about your resignations over the treatment of British soldiers in Iraq and Afghanistan. Tell us about the "common ownership" and "trust" in the EU.......or even if you will ever manage to instill that in the Labour Party, a seething cauldron of resentment and treachery.
If you look at the majority of this country's problems you will see they have been caused by white middle class pompous oafs like Ed and David Miliband, Ed Balls and Andy Burnham. Career politicians who believe they were born to lord it over the rest of us and treat us like idiots and think we should be grateful for it.
Posted by Oliver at 23:51 4 comments:

Jackboot Jacqui Smith would be more at home in the Big Brother house.

You have to give her 12 out of 10 for brass neck in applying for the job. Seriously though, if the BBC allow this fraudster to gain a top seat then their repeated claims of impartiality are gone.
She was an incompetent Home Secretary and she has nothing in any field of expertise that she could offer the BBC in that position.
I sincerely hope this revolting creature doesn't get anywhere near the BBC - If this greedy old cow gets that job then I for one will refuse to pay my television licence as a protest against that happening.
Who on earth does she think she is! She loused up in government and has nothing to offer anyone. She was the one who cried and said that she was incompetent and unprepared for the job as Home Secretary, after the scandal when she banned American radio personality Michael Savage from Great Britain, along with neo-Nazi murderers and terrorists?
I gather she was once a "teacher" so perhaps it is unsurprising that the education system is such a mess.
The BBC seems to be the dumping ground for ex Liebour politicians, no wonder it's so left wing biased.
Perhaps she will team up with fatty Prescott's wife on the One Show?
Given the austerity program currently being undertaken by the government, perhaps the Culture Secretary should ask the question "Is this job really necessary". In fact, perhaps the Culture Secretary should also ask the question "is the trust necessary?"
Posted by Oliver at 04:11 2 comments: