Red Ed is now showing his true colours at today's conference. New labour is now regressing into Old Labour with the Unions attempting to take control of the country. The union barons look particularly revolting - a mix of smug self-satisfaction and thuggish belligerence. Why do so many labour MPs and members not realize how utterly toxic the Simpson and Woodley's of this world are to their electoral chances?
What we have seen so far is window dressing. The Labour Party has bankrupted this country on the occasions that it has gained power and will no doubt continue to do so as it looks after the interests of the fraudsters and layabouts who comprise their main supporters. If you are a worker well paid or otherwise this bunch will exploit you and lean over backwards to support illegal immigrants, minority groups who make financial demands and attack the businessmen who create the wealth for this country.
Bring it on Labour you bunch of lying, useless, inept, incompetent, illogical and immoral imbeciles who think you are being caring as you destroy the country. I await the next stage of your attempt to convince the population that you have a clue. You cannot even vote for the person you think would be the best PM but instead vote for someone who looks like he could care a little bit more.
Caring about your country does not mean saying " we should all be equal". It means making a society where people have a chance to earn from effort and thus making them strive to earn. Labour has turned our country into possibly the most uncompetitive nation in the world whilst preaching the merits of globalisation. Well Ed, how easy it is, as politically wet behind the ears as you are, to run with the hare and hunt with the hounds in order to please the moronic audience attending your party conference. Yet again the Labour party clearly show that the only interest they have is that of attaining power (by telling people what they want to hear) rather than doing what is necessary and being honest.
However your own brother David was not so easily fooled, nor will be the remainder of the country, who have yet to be totally brainwashed by the BBC's distorted reporting.
Posted by Oliver at 23:29 No comments:

What planet do these creatures inhabit?
Neither the Miliband's nor their rabble rousing paymasters and the sycophantic born again Labourites are in touch with reality as they blithely ignore their appalling recent record.
I have nothing but contempt for the trades union leadership, who are almost to a a man, and they are invariably men, a bunch of greedy bullying Muppet's. I'd like to see a super tax on their earnings over £100k.Their endorsement of REd Miliband, a man so palpably unfit to lead the country, just reinforces my view. He was appalling on the Andrew Marr show yesterday.
Listening to the daily politics, apparently one lady member of Unite received 37 phone calls from the union asking her to vote for REd Milliband. Makes you wonder about the definition of harassment doesn't it? Don't you find it strange that you can have two votes - one as a member of the party and one as a union member.
Red Ed will last a year tops. While he's in charge Labour has zero chance of electoral success which, given the almighty balls-up they made last time round, a blessing indeed.
Long live the coalition.
Posted by Oliver at 07:11 No comments:

I would like say to Bob Crow, go back into your cave with the rest of the dinosaur's. You are still living in the dark ages, and the bulk of the British public will not follow your stupid ideas.
The Labour Government are responsible for the difficulties because of the money they wasted over 13 years that they were in power.Yellow streak Brown is entirely responsible for the cuts that this government will have to make.
Good old Bob, inciting his union and fellow Totally Useless C--t's members to create civil disobedience whilst picking up his £150K a year and whatever happened to our democracy?
All three of the main parties entered the election acknowledging the necessity for cuts, with only some small differences about the timing and where they should happen.
The coalition has not changed anything significant since then. In fact, public expenditure is planned to rise overall by 15% over the life of this Parliament, so all this nonsense about savage cuts is just that - nonsense.
Almost everybody voted for one or other of these parties, and thus implicitly for the cuts needed to get our finances back in order.
This is politically motivated and goes against the will of the vast majority of the electorate. Mr Crow and his fellows should be deported to North Korea or even Cuba, where they will find the democratic workers paradise that they are evidently seeking.

Yes the TUC stands for "Totally Useless C--ts"
The TUC reaction is typically selfish and short-sighted. Masses of strikes and civil disobedience will only damage the already fragile economy, making job and funding cuts even more necessary.
If we carry on without this "austerity package" it will only be matter of time before large section of the public sector are effectively bankrupt.
The media (see BBC and C4) shifts the spectrum to paint the picture as concerned left wingers with some moderate liberals. Well it's a load of rubbish. The likes of Brendan Barber are either stupid or duplicitous.
The BBC uses the term 150 billion pound deficit. The unions say don't stop spending yet, wait until the growth gets better. The 150 BILLION is per year. When will these unions and public workers realise that it is the private sector that pay their wages and their pensions. It is a total disgrace that we pay their pension when in the private sector we have to fund our own and now we have to retire at 65 + - public workers and civil servants can retire from 55 - there is something wrong in the country when the private sector pays for the life style of the public sector and then they and their unions have the audacity to say they want more and more.
Today the TaxPayers alliance issued some facts about the Totally Useless C--ts.

• That is made up of £18.3 million in direct payments from public sector organisations and an estimated £67.5 million in paid staff time.

• Total public funding for the trade unions in 2009-10 was 20 per cent more than the combined political contributions to the Labour Party and the Conservative Party in 2008-09.
Posted by Oliver at 06:55 No comments:

Yet another yellow streak cock up at HMRC!

The whole idea of yellow streak Brown's Tax regime was to make it totally incomprehensible in order to apply his Marxist stealth policies.This is all down to him who added so much legislation and incomprehensible directives that even the tax men couldnt understand. A new instruction every day and a full bookshelf every year instead of one book. I asked a taxman to explain one of the clauses on my tax return and he said he couldnt understand it himself.Why blame the troops when you have incompetent officers.
Yellow streak Brown couldn't organise a one man march up a one way street without making it complicated. The man was, without doubt, the worst chancellor and the worst prime minister in my lifetime. The man is dysfunctional, deranged, deceitful, duplicitous, dithering and downright dangerous. He makes a total mess of all that he touches and I'm not the slightest bit surprised that HMRC doesn't work properly. How could it be expected to under yellow streak Brown's control. It's a good job he's out of it now so that the system can be rationalised and put back into good order by sensible people who know what they are doing.
Posted by Oliver at 01:15 2 comments:

Why don't you leave the Hague's alone

I'm getting rather fed up with all the policital smearing that's going on especially with the recent claim; because a politician shared a bedroom with his driver that they must be queer.Well if that's the case I suspect they are not alone. I remember 50 years ago sharing a bed with another guy for 3 nights. Since then I have shared rooms with other men and believe me I'm not queer and neither were the other chaps.
This nonsense is simply another example of why the press in this country is so detested. I think they have now overtaken politicians as the least admired sector within society. Led by the remarkable unpleasant Today programme with the awful Humphreys and Mcnaughtie they should be ashamed of themselves.
Hague and his poor wife deserve a lot more respect, politicians or not and what the hell the wife of that pompous idiot Bercow has to offer I do not know. Presumably she is a paid up member of the luvvie left like Kearney herself...
Let the press try to find some real news because at the moment they are acting like dirty little voyeurs and if they don't find anything to get off on they make it up!
Posted by Oliver at 03:21 No comments:

We don't listen to war-criminals. 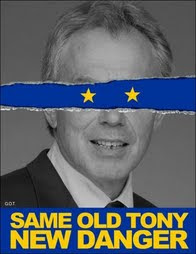 No apologies! No Shame! No Regret! Still Self Denying!