Mandelson get off the stage. The country is bored of you. You are an unelected self important tetchy appointee, thrice removed from government. 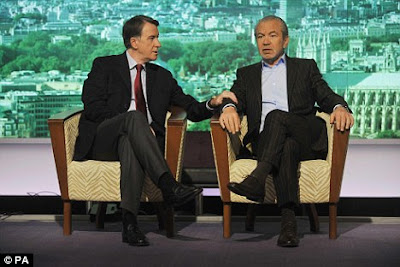 Is it just me who thinks Lord snake Mandelson is a complete pig?
He is an unelected pompous,ignorant peasant who is rude about everyone who disagrees with him. I watched yesterday morning and he didn't answer one single question. He simply shouted people down and in one case suggested that the person asking the question wasn't standing for parliament! No he isn't standing for parliament but he is going to be voting for someone who is and as such has every right not only to ask a question but also to receive a civil, straight and simple answer. I think it's pathetic. At one time votes were bought, now all politicians can do is attempt to frighten people into not voting where their conscience is telling them. I think our leaders have forgotten that this is a democracy and a vote has to be earned. I'm hearing far too much scare mongering that a vote for what you believe in is somehow bad. The country - I hope - will vote the way individuals wish to vote. It is our time to tell the politicians, not their time to tell us. Personally, I can't think of anything worse than dithering over who to vote for and ending up with Lord snake Mandelson and yellow streak Brown again. As for all the promises of free money and facilities for children - we all know there is nothing for free; someone is paying for it and it's probably you.
Posted by Oliver at 00:01