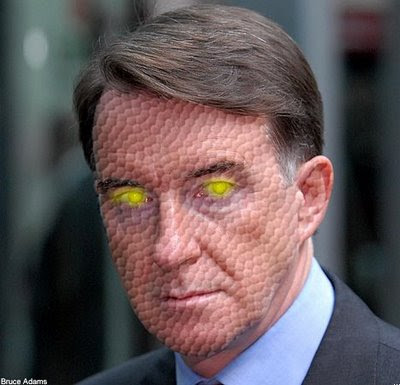 This government's arrogance and self importance knows absolutely no bounds. They have continually failed to grasp the fundamental economic nettle that it is businesses that create jobs and generate tax revenues for to support our society, not governments who spend it or squander it in Labour's case.
I cannot stand to watch the odious,twice-disgrace twice-resigned snake Mandelson on TV. He's yet another reason to vote Conservatives to get rid of this Labour government at the general election.
In the past 24 hours Labour have attempted to brand the Conservatives as Racists and now they disapprove of the giants of Commerce endorsing the Tories.
How dare they try and rubbish the views of the captain's of our industry, who know more about real world economics that the lightweights we have as the misfortune governing us for the last 13 years.
Yellow streak Brown, dumbledorf Darling, snake Mandelson, get some Balls, banana Milliband, Harperson,post pat Johnson, bumbler Straw - have any of them ever managed a profit generating business in their past? NO, so what the hell gives them the temerity to criticize those experts that do.
Most Labour politicians are not wealth creators and have never had to meet a payroll out of the profits from a wealth creating business dependent on consumer choice. Those Labour MPs trying to sell their services to private companies for inside information and contacts have not really got the marketing skills to get this work without lying / exaggerating, and most of them get quango non-jobs from their mates who in turn couldn't run a whelk stall at a profit.
Snake Mandelson is an unelected creep who isn't up for election so anything he says or does won't hurt him personally as we cannot throw him out of the House of Lords. No one should trust anything he says as most of it is plain wrong.
If ever the British public need an excuse to banish this incompetent Labour administration to the history books, now is the time.
Posted by Oliver at 00:02