Griffin may be a racist but Jack Straw is one of the most disgusting, lying, hypocritical, sleazy, two-faced elitist politicians to curse our nation. 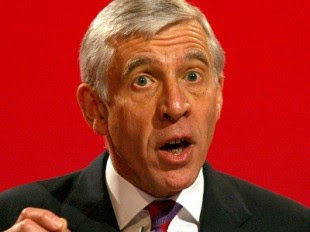 It was impossible not to feel some sympathy for the 'slug' Nick Griffin and embarrassment for what was once a great national institute for
truth - the BBC.

I have never seen such a biased, one sided edition of 'Question Time'. Nick Griffin was unable to finish many of his sentences, and was not given a fair hearing. The audience was obviously stacked up against him, and were constantly heckling him. I am not BNP but I did agree on his immigration comments, people want uncontrolled immigration to stop - our tiny island is full!.
As a life long conservative I could not agree less with the policies of the British national party but the programme particularly aided by a chairman who has rarely demonstrated greater partiality attempted in no way to embrace democratic discussion.
I thought Nick Griffin under the circumstances conducted himself rather well, I commend his courage for going on air under such immense scrutiny. The rest of the panel held a good mature debate especially Sayeeda Warsi who always speaks with distinction and intellect, the worst person on the show was Jack Straw, he failed to answer any questions directly and at times looked to be squirming more than Nick Griffin, his appearance can only have helped further damage the reputation of the Labour party.
Posted by Oliver at 01:21