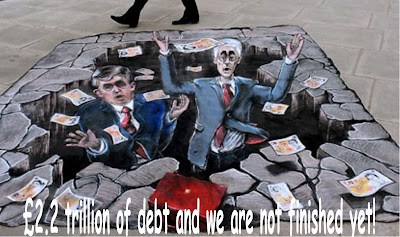 January is the month when taxpayers send in their returns and corporation tax payments are due. Government revenues ought to be strong. Official figures showed that the Treasury borrowed another £4.3 billion last month. It is the first time since records began in 1993 that the nation has been in the red in January.
Liebour had a chance to create a fairer society than blow it; and now we are all going to pay a terrible price for Liebour's appalling mismanagement of the British economy.
I can tell the tax payers exactly where the money has been going. All those people who didn't want to get a job and jump on the benefits gravy train. All the cheap labour that was allowed to flood into the country unchecked and was exploited by shady business owners out to make as much money whilst paying as little tax as they could. All the political elite who made robbing the taxpayer blind a new profession, from all political parties. All the committees and quangos set up who spent money on rubbish and unworkable schemes, who patted themselves on the back and awarded themselves massive pay rises at every opportunity they got. Treating Eastern Europe's and Africa's sick illegal migrants on the cash strapped NHS before the British people.
Paying billions each year to be part of the Franco German Alliance, better known as the European Union. Allowing local government bodies to waste money on highly questionable schemes.
This is where all the money has gone, don't worry though we can still fall back on the countries gold reserves, if only yellow streak Brown had not sold it all when the price of gold was at rock bottom.
U.K. Rest In Peace.
Posted by Oliver at 01:45