This particular turd was born in Nigeria and 'radicalised' in Yemen, so which part of that represents an increased risk to Britain ? 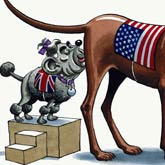 Yellow streak Brown warning about terror threat in the Yemen! Its taken him 12 years to notice - left in power it'll take him 25 to do anything useful about it.
Yellow streak Brown cannot make a serious statement about airport security without making reference to Obama (beach) and trying to make himself sound more pompous and important. Pull your head from Obama's back-side yellow streak Brown and stop acting like a big fat puppy whenever Obama is around. You and your Government policy has made Britain a pariah to the Muslim extremists and our streets are less safe because of your actions.
The people of Britain would dearly wish for you yellow streak Brown to evolve from a soviet apparatchik onto something resembling a half-competent politician. You may think you saved the world but you have certainly not saved this country by placing it directly into the extremist firing line
Bliar, yellow streak Brown and the Liebore government have done more harm to the country than any terrorist, and I'm sure there are more people in Britain afraid of the future that Liebore have made for them than there are people worried about terrorist actions.
Liebore have used terrorist bogey man to give them the excuse to make controlling and intrusive laws, and without the occasional real thing they would invent them. Funny how after a 7/7 terrorist 'success' all the local attempts have been failures. It's almost as if the security services have been keeping the pot stirred to keep terrorism in the headlines without actually doing any real harm, so that yellow streak Brown and his shower of nerds do wells can make their Stalinist laws.
Posted by Oliver at 08:37