They are the untouchables. Not as it was with Atkin and Archer They go to prison for a criminal offence. But then they were Conservatives. 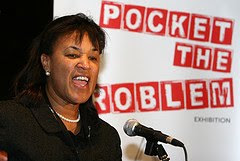 Baroness Scotland and now Harriet Harman....these slap on the wrist punishments (if you can call them that) are just another two fingers to the British public. Senior members of the Politburo are not subject to the same laws that us little people are subject to.
One law for the common people one law for the jumped up money grabbing leaches that seem to frequent the Palace of Westminster.
She committed three offences:
She drove a car while talking on a mobile phone
She reversed into another car
She left the scene of the accident without exchanging details.
She was fined on the second, and the CPS say " the mobile phone charge had been dropped because the penalty for driving without due care and attention was greater than that for using a mobile. "
The charge should not have been dropped, they are failing in their duty to uphold the law. It was still an offense, as was leaving the scene, but I see that has not even been mentioned.
What a message these people send out to the rest of us. I don't care if she is a QC, or a road sweeper, she broke the law and should be held fully responsible for it.
Yes one law for them and one for us.
And the sooner we take back our country from the likes of Harman the better.
Posted by Oliver at 00:01