Balls... scary picture of a scary man with scary levels of power. 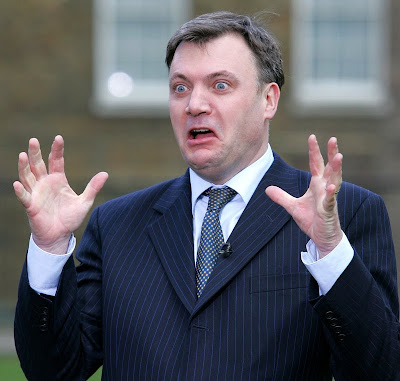 So it required some chutzpah for Ed Balls - without a hint of irony - to claim yesterday that the Tories are the 'social engineering' party for wanting to reinstate tax rewards for those who wed.
This isn't social engineering. Rather, it's a hugely creditworthy attempt by David Cameron to halt the destruction of an institution which the Children's Secretary, while married himself, appears to hold in utter contempt.
Balls & the other socialists are beyond a joke. It is their self centered belief that they are of a superior status than the rest of the countries population, that they have a god given right to determine how we live our lives, that has reduced this once great country to the pathetic sorry state we state we are now in. He hasn't got a clue and has obviously lost touch with reality and what is good for the country. He is nothing more than an overbearing opportunist with a big mouth and a tendency to bully.
They have created a lumpen proletariat of Labour voters, totally dependent on a failing comprehensive State education system in many areas, but especially in their heartlands.
Can't you just tell that there is an election coming, and it's going to get dirtier, sillier, tackier and more surreal than anything in living memory.
We are all going to be promised the earth and more by all these corrupt political pygmies like Balls and his godforsaken Ilk, as long as we vote for them.
Well not this time Teddy boy, and as for pamphlets on how to be good dad "GIVE US ALL A BREAK, you patronising little man.