Part of the rotten labours final shot at making sure they left the country broke. 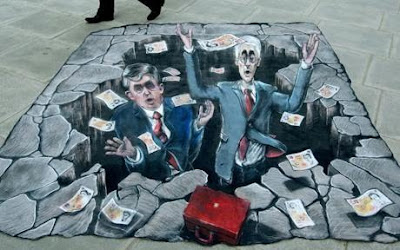 This isn't a pre banking crisis of 2006, it's 2010 and the reality of the situation Labour have put us in has to be addressed. If the Government isn't seen to be trying to reduce the financial deficit the IMF will stop lending at decent rates and the markets will see Britain as not worth investing in. I'll do without a tax cut and will pay my way so that my children don't have to pay for Labours incompetence. Labour's Brownfield site will need to be cleared before new building can commence.
This coalition must do as Labour did when they first came to power in 1997 and this was to blame the Tories for every ill that went before them, they did this every time someone from Labour was interviewed either on the TV or radio. People have to remember why these cuts are necessary, even with what the Labour party has kept on telling the public that it was an American caused recession and absolutely no fault of their policies, Labour has this tendency of it was not us, it was them. Even after the election they were still trying to convince the public of all the great deeds they had bestowed on the country, omitting of course any mention of the debt mountain left behind.
Posted by Oliver at 07:09