Yellow streak Brown and dumbledorf Darling should come clean and admit it's just guesswork. They just don't have a clue. 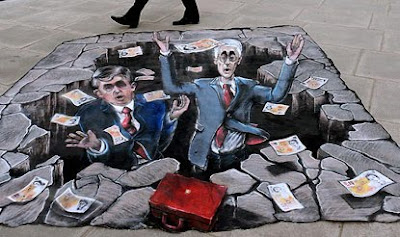 The recession is proving even deeper than feared, Alistair Darling will admit in next month's Pre-Budget report.
The Chancellor will forecast the steepest annual slump since modern records began.

No dumbledorf Darling it's not proving worse than feared. It's proving just as bad as everyone except you and all those living in Nu Liebore cloud cuckoo land said it was. Your yellow streak boss, as usual, stuck his head in the sand and tried to claim it was all the making of the USA, he had saved the world financially, and the UK was the best placed EU country to weather the storm. Everyone else knew the country was bankrupt and in a debt spiral but of course yellow streak Gordon and his glove puppet knew better. If you lot are that incompetent at managing the country and it's finances how about resigning en mass and letting the people who's money you've flushed down the metaphorical toilet decide who they think is best qualified to repair the damage you've caused!
What we have to realise is that the government will always have little power, especially when banks are paying themselves millions of pounds for private jet journeys and lavish television adverts (our money), whilst declaring there is not enough money to go around.
The world needs to put the money managers in line with the rest of the human beings, which actually obey free market forces. What exactly do banks do for us? lend us money, give us interest. No matter how they market themselves, they shouldn't be filthy rich, just because they manage the currency of trade in our world. No banker should be paid more than a surgeon. They don't save any lives, they just play with numbers that mess with our lives.
Why don't these people just go away. I am sick to death of listening to a bunch of morons who have as much idea of Governing as the man in the moon.
Yet they cling on, cling on in the misguided hope that they will have some chance of being elected once again next year. These people should be tried for treason, such is their agenda of all things foreign. They care not for the British people, they are sly, underhanded, and they are liars.
Posted by Oliver at 07:59