This mother's grief for a lost son should never have been so disgracefully tainted by exploiting her pain and sorrow. 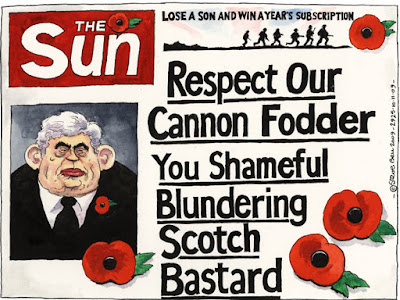 The Sun has declared Mrs Janes "Mum at War," and the poor woman is their weapon for the week for belittling yellow streak Brown.
I applaud her on her actions.
With the sensitivity of this issue, yellow streak Brown's letter should either do it properly or not at all. From whatever your starting point, you work on it till it is acceptable, not least out of respect for the recipient. She is upset that her Son Jamie was killed in action, knowing the lies that the Government use to keep troops our there. She feels he died unnecessarily. She is angry and frustrated - the army do not listen with it's leaders backing the Government over supplies and the Government do not listen. She received the letter and decided it was an opportunity to get heard and you can see how effective it is.
How can a man who can't spell run a country? He is ultimately responsible for education. No wonder it's been dumbed down so much! He wants everyone as 'dumb' as him.
No money, letter or compassion will bring her son back.
The reason yellow streak Brown is getting hounded is that he is patently insincere and is obviously only performing all this for a perceived political benefit. Insincere, not just in the failings in the letter, which by themselves might possibly be excusable, but because every decision he's ever made or been involved in regarding the deployment, strategy, justification and most critically, resourcing of our forces has been despicably self & party serving and this is simply part of an ever more desperate strategy to cling to power.
Liebore is dead, it's just dragging out the burial. Yellow streak Brown is a vaudeville act that nobody laughs and just aiming for sympathy. The increasing torrent of titillating policy novelties just drives home how utterly degenerated this government has become. It's going to get so much worse. If you think this episode was deplorable, that's just for starters. It's the inevitable consequence of a broken, corrupt and incompetent government clinging on by its fingernails. Yellow streak Brown, it's time to go. Hanging on will only make it all so much worse.
Posted by Oliver at 22:52